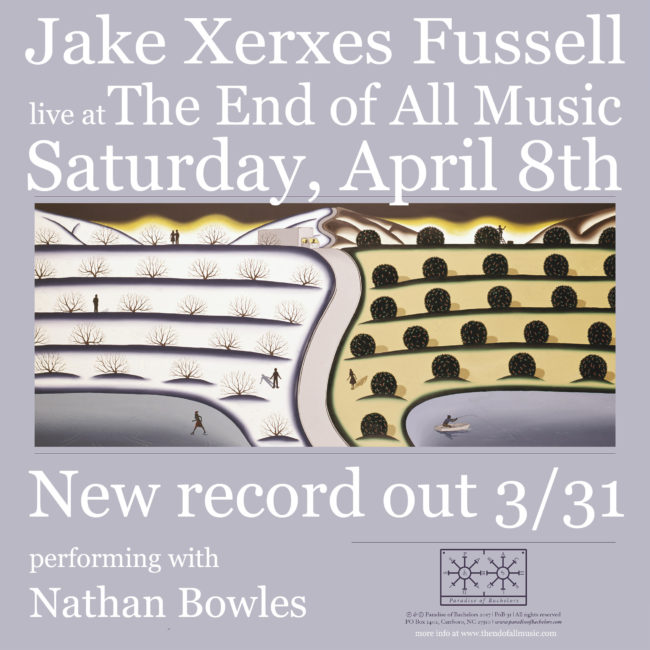 Our good buddy (and former employee) Jake Xerxes Fussell returns to Oxford on Saturday, April 8th in support of his excellent new record, What in the Natural World, released by Durham, North Carolina label Paradise of Bachelors. Jake will perform in the record stare at 4 p.m. before playing a full set later that night at Proud Larry’s. Nathan Bowles (also a Paradise of Bachelors label-mate with several great records out) will be performing with Jake.

The new record drops on March 31st and we’ll have plenty of copies of it on vinyl and CD. Buy the new record and pick up a copy of Jake’s excellent debut if you haven’t already, then come back to the shop to hear the songs live. We’ll have some free beer for those at least 21 years old.

Fussell has a deep respect and affinity for the Southern folk vernacular, though he also maintains his childlike awe for it. [What in the Natural World] marks a move into more existential questions … vignettes of Southern life, with an open-hearted groove that would please scholars and little kids alike—Fussell’s burly, winking voice is made for storytelling. – NPR Music

A singular combination of pedigree, experience, education, and talent. – The Oxford American

It’s difficult to imagine another contemporary interpreter delivering a tale of desperation and sadness with such tenderness, warmth, and grace. The room he leaves for the song to breathe allows it to flourish into its own fully-formed, nuanced world – one as familiar today as during the time of its origin. Here, Fussell taps into those roots and in turn carries the pathos across an entire century, creating something wholly his own. No small feat and just one of the many exhibits that display a truth as absolute as the suffering in this song: Jake Xerxes Fussell is a national treasure. – Aquarium Drunkard