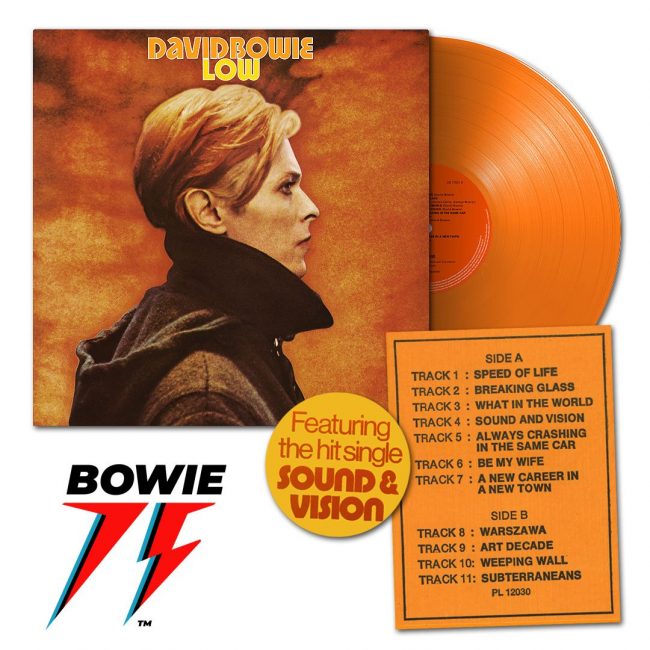 Record of the Month Club members will be getting a copy of Bowie’s Berlin masterpiece LOW pressed on limited, orange vinyl for the records 45th anniversary. These are shipping out ASAP, so sign up if you’d like a copy.

First released by RCA in January 1977, Low was David Bowie’s eleventh studio album. To celebrate its 45th anniversary Parlophone is proud to announce a special limited edition ‘bricks & mortar’ only pressing of the album on orange vinyl, which means you can only get it at good record shops. After years of drug addiction when living in Los Angeles, Bowie moved to France in 1976 with his friend Iggy Pop to sober up. There, Bowie produced and co-wrote Pop’s debut studio album, The Idiot, featuring sounds Bowie would explore on his next record. After completing The Idiot, Bowie began recording the first of three collaborations that became known as the Berlin Trilogy with American producer Tony Visconti and English musician Brian Eno. Sessions began at Hérouville’s Château d’Hérouville in September 1976 and ended in October at Hansa Studios in West Berlin, where Bowie and Pop had relocated.

Grounded in art rock and experimental rock and influenced by German bands such as Tangerine Dream, Neu!, Harmonia and Kraftwerk, Low features Bowie’s first explorations in electronic and ambient styles. Side one consists primarily of short, direct avant-pop song-fragments, with mostly downbeat lyrics reflecting Bowie’s state of mind, and side two comprises longer, mostly instrumental tracks, conveying musical observations of Berlin. Visconti created the distinctive drum sound using an Eventide H910 Harmonizer, a pitch-shifting device. The cover artwork, a profile of Bowie from the film The Man Who Fell to Earth (1976), was intended as a visual pun, meaning “low profile”. RCA refused to issue Low for three months, fearing it would be a commercial failure. Upon release, it divided critical opinion and received little promotion from RCA or Bowie, who opted to tour as Pop’s keyboardist. Nevertheless, it reached number two on the UK Albums Chart and number 11 on the US Billboard chart. Two singles were released: “Sound and Vision”, which peaked at number three on the UK Singles Chart, and “Be My Wife”. The success prompted RCA to release The Idiot in March 1977. In mid-1977, Bowie played on Pop’s follow-up album Lust for Life before recording his album “Heroes”, which expanded on Low‘s musical approach and features a similar mix of songs and instrumentals.

In later decades, critics have rated Low one of Bowie’s best works, and it has appeared on several lists of the greatest albums of all time. It influenced numerous post-punk bands such as Joy Division, and its drum sound has been widely imitated.

Following Bowie’s death, Bryan Wawzenek of Ultimate Classic Rock listed Low as his greatest album, writing: “Low is more than songs and sounds. The creative partnership behind the record forged a feeling, a mood, a place. Like very few of the best albums ever recorded, Low contains a universe you can inhabit, for 40 minutes at a time. It’s Bowie’s masterpiece.”