Our ROTM Club January pick is… 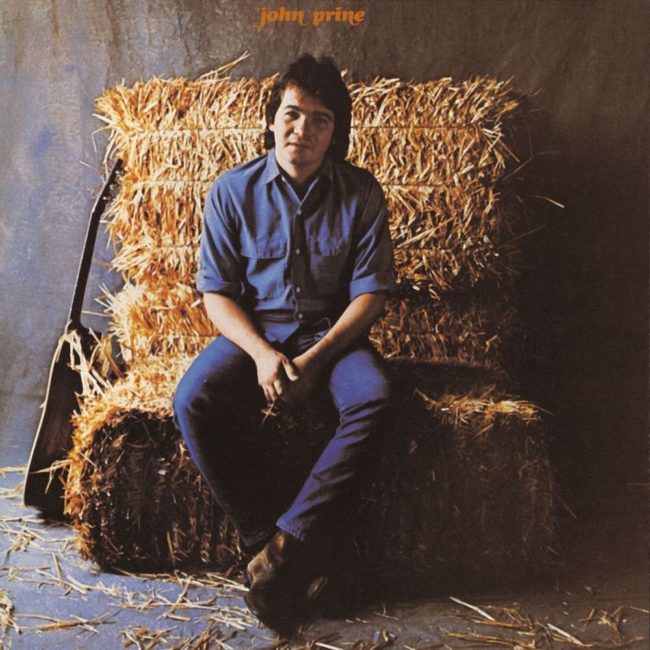 John Prine’s self-titled, debut LP back in print on vinyl for the first time since its original release is 1978. Members will get a copy of the record on 180 gram vinyl mastered from the original, analog tapes. They will also get a 2017 calendar courtesy of Rhino Records.

You can find out more about our Record of the Month Club here and you can listen to John Prine’s debut record over on our Spotify playlist.

Allmusic says: A revelation upon its release, this album is now a collection of standards: “Illegal Smile,” “Hello in There,” “Sam Stone,” “Donald and Lydia,” and, of course, “Angel from Montgomery.” Prine’s music, a mixture of folk, rock, and country, is deceptively simple, like his pointed lyrics, and his easy vocal style adds a humorous edge that makes otherwise funny jokes downright hilarious.

This is a very good first album by a very good songwriter. Good songwriters are on the rise, but John Prine is differently good. His work demands some time and thought from the listener — he’s not out to write pleasant tunes, he wants to arrest the cursory listener and get attention for some important things he has to say and, thankfully, he says them without fallinginto the common trap of writing with overtones of self-importance or smugness. His melodies are excellent.

If Prine had less talent, this would have been a much easier review to write. Because of the fact that the highs show brilliance, the lows are more noticeable; he’s a good songwriter but there are indications that he can be a great one. In his liner notes Kris Kristofferson writes of Prine: “Twenty-four years old and writes like he’s two-hundred and twenty.” I readily agreed with that, but after repeated listenings, the conviction rose in my mind that he doesn’t really write like he’s old — the bitterness in his songs might make it seem that way. Hopefully, age brings some mellowness, too. The stories he tells have a negative kinkiness; if pain isn’t apparent, it’s just below the surface.

“Spanish Pipedream” is a happy song, but it is a pipedream. “Your Flag Decal Won’t Get You Into Heaven Anymore” is another rollicking song, but it does deal with death. This is not to say that Prine’s view of the grimness of life is inaccurate. (“Six O’Clock News” might be overdone, ending with the suicide of a boy who learns he’s illegitimate.) This is not even meant to declare this quality of Prine’s work as a fault, for his bitter eye reflects that he really has strong ideals, that he’s a compassionate person who has seen sharp disillusionment growing from people’s uncaring behavior toward other people. He’s certainly aware of the lonely traps people construct for themselves. It’s just that bitterness corrodes after a time — it’s a dead-end street for songwriters.

“Pretty Good” is a pretty good song and pretty funny (but with that kinky streak again) in which the singer fucks a girl from Venus, another girl gets raped by a dog, and various gods hang out, all interspersed with an unlikely chorus which is one of the few touches of sweetness on the record: “Moonlight makes me dizzy/Sunlight makes me clean/Your light is the sweetest thing/That this boy has ever seen.”

All of Prine’s songs have a strong country feel, but “Paradise” is pure, classic country, downright bluegrass in both lyric and melody, with a tale of how the coal company ruined the beautiful land in Western Kentucky. “Flashback Blues” is an uptempo farewell lament that’s a poetic tumble of keen nostalgia, insights to loneliness and isolation, the pain of seeing one’s self in emotional nakedness and the running ahead of that pain — but it sometimes catches up.

Prine’s G.I. junkie song. “Sam Stone,” is already known by some and is favored in other singers’ repertoires. I find it too heavily contrived, not up to Prine’s standard. Then there’s “Angel from Montgomery.” where again the narrator is old. “Quiet Man” has the thoughtful line, “Steady losing means you ain’t using/What you really think is right.” “Illegal Smile” is again about a bad case of the blues (saved by a sense of humor) — John Prine must know what bad times are.

The album is well-produced, with a small back-up band used throughout. Though after seeing John perform solo at Paul Colby’s Bitter End, accompanying himself on guitar, it’s obvious that he can do well with or without. It’s good to have such a fine new talent around who is both interesting and provocative. If he’s this good this young, time should be on his side.