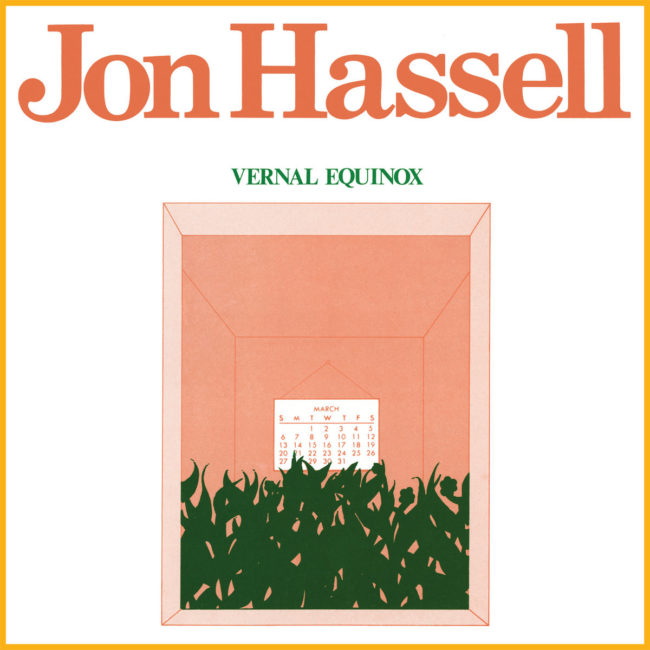 April 2020 will go down in history as one of the strangest and difficult months in our collective lifetimes. We don’t know what the future holds and we are all stuck inside…away from normal lives. We decided to pick a record to help during these times. We decided to pick a record that can be intently listened to while being ignored at the same time–like Brian Eno said, ambient music is “ignorable as it is interesting.”

Jon Hassell’s Vernal Equinox is legendary. Finally back in print on vinyl for the first time since 1977 when it was first released. Hassell’s music melds the work of minimalists like La Monte Young and Terry Riley with non-Western folk, avant-garde classical and electronic, and early-’70s electric Miles Davis, the trumpeter and composer arrived more or less fully formed in 1977 with his solo debut Vernal Equinox. Originally released on Lovely Music, the label most famous for putting out the music of experimental composer-performer Robert Ashley, Vernal Equinox condensed everything Hassell had to offer the avant-garde of the late ‘70s in a petri dish. No other entry in Hassell’s catalog has Vernal Equinox’s sense of excitement and discovery, palpable with the introduction of each brilliant new sound.

Club members will get a copy of the beautiful vinyl reissue of Jon Hassell’s Vernal Equinox. We will begin shipping (and delivering to your local folks!) this week.

We’ve never chosen an ambient record as part of our Record of the Month Club, but the timing just seems right. Y’all hang in there.

“The envelope filter on Hassell’s horn similarly draws a reference to Miles Davis’ use of the wah-wah pedal from that time. Nonetheless, in 1976, Vernal Equinox was remarkably unique and ahead of its time, and sowed the seeds of Hassell’s influential Fourth World aesthetic, which he would continue to develop and refine. Decades after its release, Vernal Equinox still provides an enchanting and entirely contemporary listening experience.” -Allmusic.com