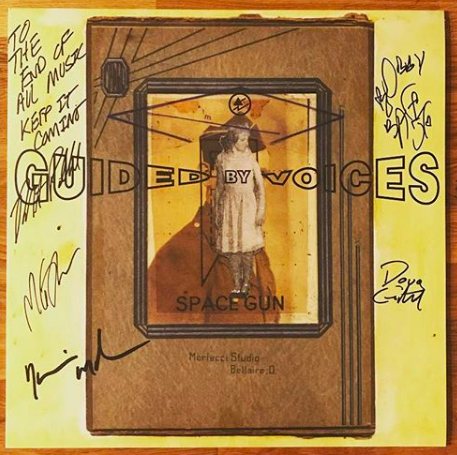 The July selection for our Record of the Month Club is here and ready to go! We’ve got a pretty amazing record coming your way; Guided by Voices, the ever-prolific rock band from Dayton, Ohio, delivers Space Gun–one of their best records in a crazy-long career of great records. And to make everything better, we were able to get the entire band to autograph all the copies for our ROTM Club members.

Robert Pollard has long taken pride in being recklessly prolific, cranking out albums with his band Guided by Voices at a dizzying pace while also issuing a steady flow of solo releases and side projects. When GBV released August by Cake in April 2017, Pollard announced it was the 100th album he’d appeared on, and several fans contested his math, insisting he’d been on even more LPs than that. So when Pollard declared that Space Gun would be the only Guided by Voices album of 2018, it was hard not to wonder what he was up to. Why was the most prolific man in indie rock suddenly dialing down his workflow? Well, maybe he just wanted to concentrate on making one really good album for a change. Pollard certainly benefited from the strength and chops of the edition of GBV he assembled — guitarists Doug Gillard and Bobby Bare, Jr., bassist Mark Shue, and drummer Kevin March — on 2017’s August by Cake and How Do You Spell Heaven, and Space Gun doubles down on the skill of his current collaborators. Pollard hasn’t had a band this solid since GBV’s initial breakup in 2004 (that lineup also featured Gillard and March), and they sound tight, muscular, and imaginative on Space Gun, not just playing Pollard’s songs but giving them shape and gravity they might not have had otherwise. These guys sound like a band, not a handful of backing musicians, and with producer Travis Harrison at the controls, this real band has made what sounds like a real album. Space Gun is full-bodied and adventurous, with the subtle but intelligent use of the studio giving the album a sonic gravitas that many of GBV’s albums, good as they are, happen to lack. And as both a songwriter and a vocalist, Pollard is in especially fine fettle, with his bent pop melodies and gloriously cryptic lyrics a perfect match for a band that can play this stuff with a power that belies its detail-oriented intuition. Guided by Voices haven’t made an album that’s this committed to craft since 2001’s Isolation Drills, and if Space Gun doesn’t quite match that underappreciated masterpiece, it comes close enough to confirm that Guided by Voices are quietly in the midst of a late-career renaissance.