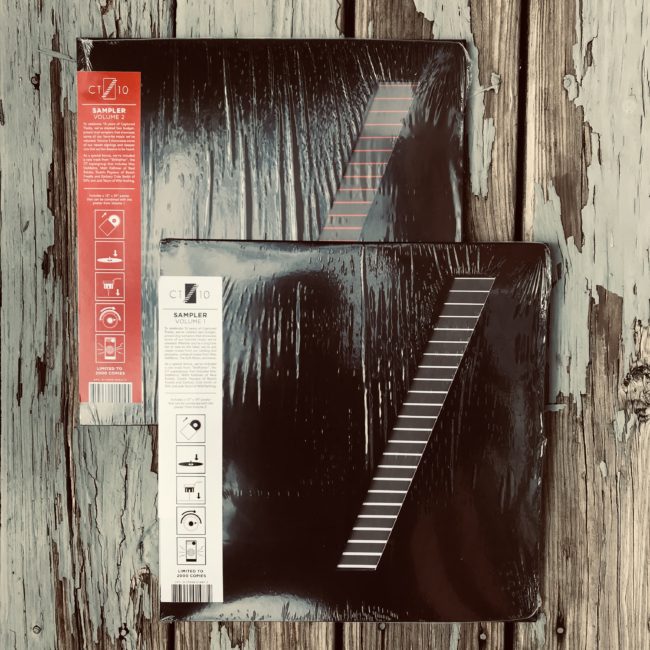 Captured Tracks celebrates 10 years this November so we saw it fitting to select for our Record of the Month Club the two compilations they’re releasing for the occasion. ROTM Club members will get a full Captured Tracks package that includes both volumes of the 10th anniversary compilation plus lots of other (hilarious!) Captured Tracks swag. Sign up now to get this great set.

We’ve been stocking Captured Tracks releases since we opened in 2012. And we’ve sold a ton of Mac DeMarco LPs thanks to them. We also saved a ton of money personally when they reissued affordable versions of the Flying Nun catalog…like that Chris Knox Seizure reissue. CT is a true indie label that’s stayed true to what indie labels should be doing; releasing music that they like and supporting their artists, indie record shops, and setting a standard for how a indie label should operate…plus we think they’re funny and cool 😉 We’re excited to get these two volumes into your hands. Hopefully the records will open the door to exploring what all the label has to offer.

To celebrate 10 years of Captured Tracks, we’ve created two vinyl samplers that showcase now-classics from a roster of vibrant and varied artists. Volume 1 features Mac DeMarco, DIIV, Wild Nothing and more. Volume 2 showcases some of our newer signings and some of our deeper cuts that we feel deserve to be heard. Plus, we’ve thrown in an handful of exclusive tracks to sweeten the deal. Ya’ll remember that supergroup called Shitfather?

Includes a 12″ x 24″ Poster. The Front of the Poster of Volume 1 is a graphic designed to be put together with the Poster from Volume 2. The Back of the Poster of Volume 1 is a Label Discography also designed to be put together with the Poster from Volume 2.
Volume 1 Tracklist:
A1 Minks – Kusmi
A2 Craft Spells – Ramona
A3 COSMETICS – Sleepwalking
A4 DIIV – Big Joke
A5 Widowspeak – In the Pines
A6 Mac DeMarco – Still Beating (Live) – Exclusive Track
A7 Juan Wauters – Woke Up Feeling Like Sleeping
–
B1 Chris Cohen – Caller No. 99
B2 Beach Fossils – Distance
B3 Wild Nothing – Paradise (Feat. Michelle Williams Spoken Word) – Exclusive Track
B4 Blouse – They Always Fly Away
B5 The Soft Moon – Origin – Exclusive Track
B6 The Jameses – Caribou
B7 Shitfather – Only a Shadow (Live) – Exclusive Track
Vol. 2 Tracklist
A1 Molly Burch – Try
A2 Nic Hessler – Please Don’t Break Me
A3 EZTV – Trampoline
A4 Reptaliens – 29 Palms
A5 Dinner – Un-American Woman
A6 Holograms – ABC City
–
B1 Perfect Pussy – Driver
B2 Naomi Punk – Burned Body
B3 B Boys – Energy
B4 Wetdog – Lower Leg
B5 MOURN – Otitis
B6 Lina Tullgren – Asktell
B7 Shitfather – Tin Birds (Live) – Exclusive Track