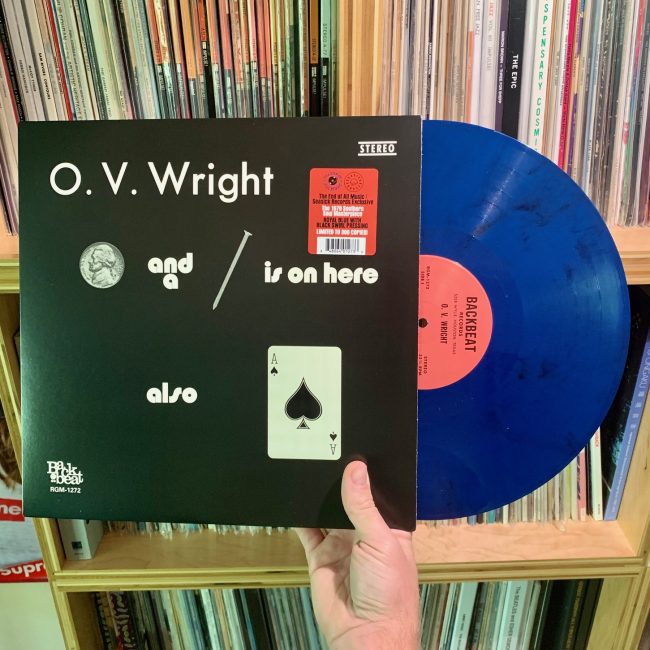 The September pick for our Record of the Month Club is a cool project we’ve had in the works for quite a while. We teamed up with our pals in Birmingham, Seasick Records, to press our own color exclusive of the recent O.V. Wright reissue, A Nickel and A Nail and Ace of Spades, from Real Gone Music. We’ve got a limited (300 copies split between the two record stores), blue and black color vinyl version of the Southern Soul Masterpiece from 1972–crazy hard to find until now!

Current Club members will be getting a copy, AND we’ve got only a few remaining copies for new sign ups… so sign up for our Record of the Month Club asap if you’d like a copy. Currently, this title will only be available for ROTM Club members or at Seasick Records in Birmingham. Sometimes great things come in humble packages. The ramshackle cover art for this 1972 album makes it look like a bootleg, and the rampant misspellings and inconsistencies in the album and song titles make it clear that whoever was in charge of proofreading at the Back Beat label must have taken the day off when the art was circulated. But no matter… seldom has the secular met the sacred with as much emotional force as on O.V. Wright’s A Nickel and a Nail and Ace of Spades. That’s what makes it one of the greatest Southern soul records ever waxed. Mind you, just about any record produced by Willie Mitchell and featuring the Hi Records Rhythm Section and the Memphis Horns will pack a punch. But it’s the raw emotion of Wright’s vocal delivery, the gospel styling stirred in with the pure, pleading anguish, that pushes this collection of songs over the top to sheer transcendence. Record buyers noticed, too; ‘A Nickel and a Nail,’ ‘Ace of Spades,’ and ‘Eight Men, Four Women,’ three of the biggest hits O.V. Wright ever had, were all on this album. The golden era of Southern soul was essentially over by 1971, but thankfully no one told O.V. Wright about this; this album, which as the title suggests featured two of his biggest hits, showed that his gifts as a vocalist were near the peak of their strength, and this is Memphis-style R&B in the grand tradition. Willie Mitchell produced these sessions at his Royal Recording Studio in Memphis, with the Hi Records Rhythm Section and the Memphis Horns providing the backing, and their performances lend the music a smooth, glorious burn like fine brandy, and are not unlike the work they did with Al Green, but reveal a darker and bluesier tone. Great as the band is, Wright headlines this show, and when he sings he dominates these sessions with grace and authority; the longing and hurt in his voice are a wonder to behold, and the burnished gospel influences in his voice meld the secular and the sacred with a powerful common belief, particularly on “He Made Woman for Man.” The lovers’ ache of “Don’t Take It Away” and “When You Took Your Love from Me,” and the blues-shot laments of “A Nickel and a Nail” and “Afflicted” are as powerful as Southern soul got in the early ’70s. Wright was a master of this form, and while he would lose his life only nine years after this album was released, A Nickel and a Nail and Ace of Spades sounds like the work of an artist as powerful and vital as you could ask for. Brilliant music, despite cover art that makes this look like a low-budget bootleg.