Our ROTM pick for Feb is… 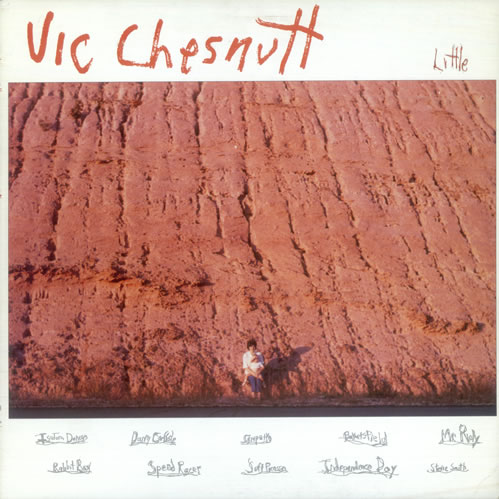 Vic Chesnutt’s debut album, Little, is a work of pure Southern Gothic genius. Chesnutt’s records are by no means easy on the heart, but they’re beautiful. His songs fit right in with the darker side of Southern literary tradition like the best short stories of Flannery O’Connor and Larry Brown. His lyrics take on a literary merit much like Bob Dylan’s (who’s recent Nobel Prize in literature proves that songwriting is a form of high poetry). These are important songs by an important Southern artist. We’re really excited to be able to stock all of Vic’s records in the shop. They’re all records that need to be heard, and need to be owned…on vinyl.

Little was produced by fellow Athens, GA artist (and R.E.M. lead singer) Michael Stipe. The lush, rich poetry of the lyrics on Little is counterbalanced by Stipe’s stark production, with mostly live-sounding performances by Chesnutt accompanied by little more than his guitar. The recordings were done as demos, “on an October day in 1988 at John Keane’s gussied up studio…me feeling rather rough from the night before,” writes Chesnutt.

You can listen to Little over on our ROTM Club Spotify playlist.

The above photo was taken from the Oxford American. Read John Jeremiah Sullivan’s excellent profile on Vic right here.

Check out the recent book by Kristin Hersh on Vic’s life, Don’t Suck, Don’t Die: Giving Up Vic Chesnutt. You can buy a copy at Square Books.