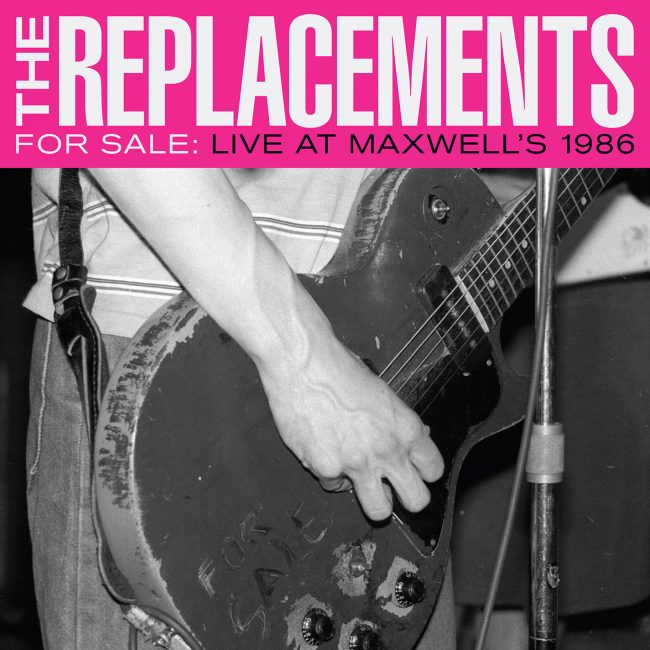 Author and music critic, Bob Mehr, will be headed to Thacker Mountain Radio on Thursday, October 5 at 6 p.m. to discuss his liner notes in the upcoming live album The Replacements for Sale: Live at Maxwell’s 1986–the band’s long-awaited live record from its golden era–as well as his excellent book, Trouble Boys–now out in paperback–which chronicles the history of The Replacements. You can see the full Thacker Mountain Schedule here. You can purchase Trouble Boys from Square Books now or snag a copy at the event.

We’ll be at Off Square Books for the event selling copies of The Replacements for Sale: Live at Maxwell’s 1986 on both vinyl and CD a day earlier than the release date (Oct. 6th) as well as other recent vinyl reissues of The Replacements classic catalog. NOT TO MENTION, we’ll have some free goodies courtesy of Rhino Records to give away to anyone that buys a record–such as free posters, buttons, stickers, and more.

Bob Mehr is the music critic for The Commercial Appeal and a longtime correspondent for MOJO magazine. He contributed liner notes to the Grammy-winning Big Star box set Keep an Eye on the Sky, and has written essays for reissues by the Replacements, Kinks, Warren Zevon, the Dixie Chicks, Al Green and many others. A native of Los Angeles, he lives in Memphis, Tennessee.

The Replacements for Sale: Live at Maxwell’s 1986 is the first official delve into the vaults for The Replacements since the 2008 expanded CD reissues, and hopefully the first of a series of albums of unreleased material. And what better place to start than with this live recording from Maxwell’s in 1986, a relic from the much beloved era of the band with Bob Stinson as the guitarist. This 29-song performance, captures the Replacements just a couple weeks removed from their performance on Saturday Night Live, with a set list touches on all five of the band’s albums to that point, plus a few rarities and covers.

LOS ANGELES – In February 1986, The Replacements performed a classic live show at Maxwell’s in Hoboken, NJ. That night, a 24-track mobile studio was on hand to record the quartet as they careened through a 29-song marathon that mixed tracks from all of the band’s albums to date with B-sides and covers. Until now, that pristine recording of the legendary performance has only been available in low-quality bootleg form. Even so, Pitchfork has called the show “a fiery, focused set that would make a true believer out of any skeptic.”

On October 6, FOR SALE: LIVE AT MAXWELL’S 1986 will finally make its commercial debut as a two-disc set ($19.98) and a double-LP ($29.98). The music will also be available on digital download and streaming services. This marks the first live album by the band to see an official release on any of these formats. Their infamous 1985 live release The Shit Hits The Fans, famously recorded with an audience of roughly 30 people, was only available on cassette. The set also includes new liner notes by Bob Mehr, author of the New York Times bestseller Trouble Boys: The True Story Of The Replacements, as well as never-before-seen photos from the Maxwell’s show by noted music writer and photographer Caryn Rose.

Paul Westerberg, Bob Stinson, his brother Tommy Stinson, and Chris Mars made their major-label debut in October 1985 with the release of Tim on Sire/Warner Bros. When the acclaimed album reached the charts in January, the band was preparing to perform on “Saturday Night Live” — where they would later be banned for life for using profanity live on air — before launching a short East Coast tour that included the show in Hoboken.

The show at Maxwell’s would prove to be one of the last great performances by the four original members of the Replacements, a much beloved line-up including Bob Stinson on guitar, before his departure from the band in 1986. The songs they played spanned the band’s entire history while giving prominence to new material from Tim, including “Bastards Of Young,” “Left Of The Dial” and “Kiss Me On The Bus.” Mixed in were favorites like “I Will Dare” from Let It Be (1984) and “Color Me Impressed” from Hootenanny (1983). But it was songs from the band’s first album — Sorry Ma, Forgot To Take Out The Trash (1981) — that seemed to summon their best on furious versions of “Takin’ A Ride” and “I’m In Trouble.”

The original 24-track master tapes of the show sat in the Warner Music vaults until being given a proper mix in 2007, but it would still be another decade before the concert would get its official release. Mehr writes in the album’s liner notes: “Now, a decade later, and more than 30 years after the original concert, Replacements For Sale finally offers high-fidelity proof of the peculiar alchemy and unadulterated majesty of one of rock and roll’s greatest bands.”