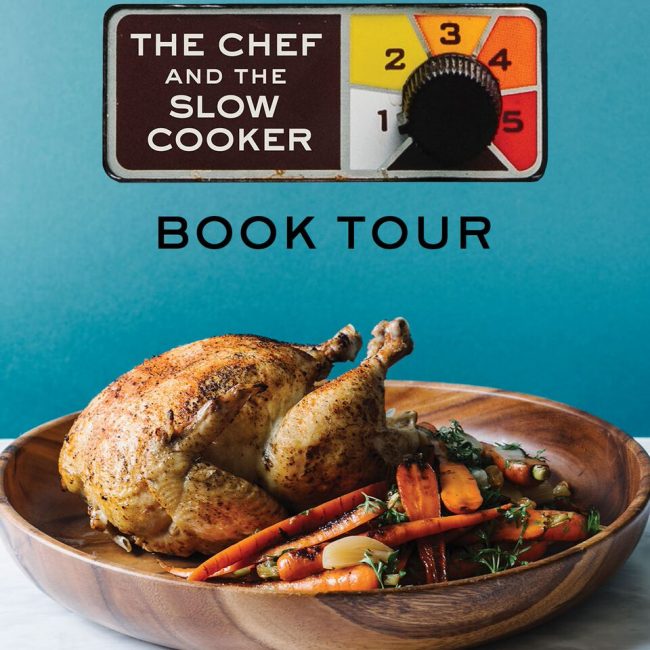 Square Books will be on site selling copies of The Chef & the Slow Cooker.

We’re excited to host chef and pal, Hugh Acheson, right here at the record store for his new cookbook, The Chef & the Slow Cooker. Hugh will be cooking his way across the country in an Airstream trailer, which will be parked out in front of the record store (starting at noon) where folks can watch a cooking demonstration, buy some tacos, eat the tacos, browse the record store, get their cookbook signed, and just hang out. We’re partnering up with Square Books to make this event happen.

We’ll also have a limited-edition t-shirt for the event featuring the “Listen Up Y’all” artwork by Hugh Acheson, which originally appeared on a (now sold out) tote bag.

You can preorder a copy of The Chef & the Slow Cooker from Square Books right here. In partnership with Airstream, Cholula Hot Sauce, Whole Foods Market, and All-Clad Metalcrafters, Hugh will be taking a good ole’ fashioned coast-to-coast road trip to bring The Chef & The Slow Cooker to 25 cities across the USA. Starting November 10, Hugh will load up a 2017 International Signature Airstream with fresh ingredients from Whole Foods Market, plenty of Cholula Hot Sauce, many All-Clad slow cookers, and stacks of copies of The Chef & The Slow Cooker to share the excitement and ease of from-scratch, slow cooking with America.

In The Chef and the Slow Cooker, Hugh brings a chef’s mind to the slow cooker, with 100 recipes showing readers how an appliance generally relegated to convenience cooking can open up many culinary doors. He shows how your trusty slow cooker can still surprise you—you can use it to poach fish, to steam-roast a chicken or leg of lamb, to make intense stocks and broths, and of course to braise the most tender short ribs. It’s an approachable, fun, comforting collection of recipes, spiked with global influences and elevated by smart cooking. Using flavor profiles, combinations, and techniques never before seen in a slow cooker cookbook, The Chef and the Slow Cooker proves that even though slow cookers are an old-school technology, they will guide you to better meals in this contemporary world. All while giving you the ability to walk away and live your life while dinner is cooking.