Our Favorite Records of 2018 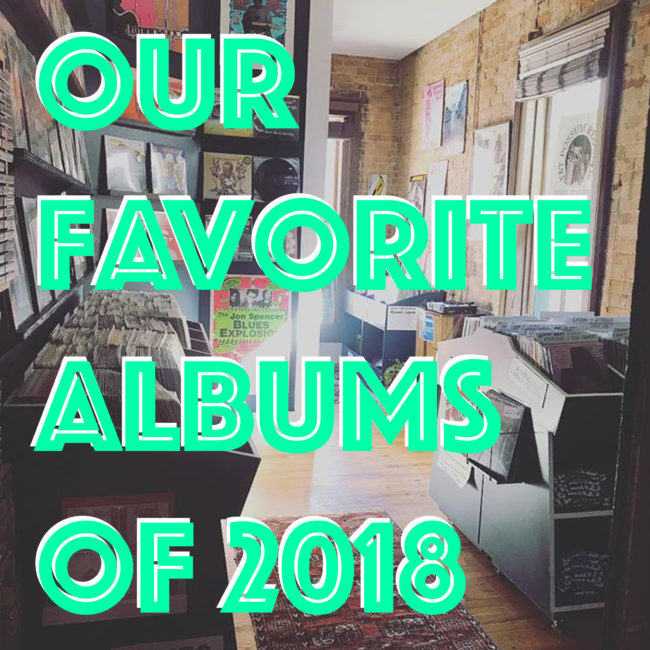 Here they are, folks! The best records of the year…we think.

In no particular order, these 10 albums were our favorites of the year.

Also, be sure and check out our 2018 Holiday Gift Guide.

–Spiritualized And Nothing Hurt (Fat Possum)

Once upon a time, Spiritualized mastermind Jason Pierce could command the budget to throw orchestras and choirs and bigtime session musicians all over his records. Those days are over. Records just aren’t selling like that anymore, and cultish British space-rock gospel-blues records especially aren’t. So instead, Pierce spent years teaching himself ProTools. Mostly working from home, he made an album of towering and majestic hangover hymns that simply sound like he recorded them with choirs and orchestras and bigtime session musicians. That kind of grandeur, it turns out, is still possible; you just have to put in the work.

Con Todo El Mundo is a melting pot of sounds from across the world, recorded in a small-town Texas barn. Khruangbin is Thai for “airplane,” and the Houston trio has created an intercontinental musical flight on its sophomore album. Much of the band’s overseas cultural influences come from music inspired by Western genres, namely the golden era of funk and soul à la James Brown. The band — composed of Laura Lee on bass, Mark Speer on guitar and Donald “DJ” Johnson on drums — has spent years unearthing vintage recordings from Southeast Asia to the Middle East. Each song feels like a postcard from exotic travels and the album is Khruangbin’s journey to introduce these sounds from these voyages. The playful “Evan Finds the Third Room” draws from 1960s Thai funk, while the blissfully infectious “Maria Tambien” takes musical inspiration from 1970s Iranian soul. Taking a trip with the winsome Con Todo El Mundo (translation: With All The World) Khruangbin gives us a window seat on an invigorating musical experience with a serious groove.  -NPR

–Yo La Tengo There’s A Riot Going On (Matador)

This is just what the world needed in 2018. Yo La Tengo capture the feeling of post-traumatic calm on their latest album, assuring their status as a wry and comforting cornerstone of indie rock. Also, the Yo La Tengo show at the Lyric this year was one of the best shows of all time 🙂

In 2015, drummer Makaya McCraven released In the Moment, an album lauded by critics as a new direction in modern jazz. The record featured reworkings of live recordings from a band he led over the course of a year at a small club in Chicago. Acclaim has followed McCraven through his career ever since, and he’s continued to refine this style of live recording, then remixing his performances.

Universal Beings builds on his strengths by taking the show on the road. Here, McCraven explores not just his own unique drumming style, with added soloists, but some of the most vital jazz scenes of the world: London, Los Angeles, New York and, of course, Chicago. Beyond McCraven’s formidable drumming and editing style, this album sounds like the scenes it was created in. The London side is danceable and upbeat. Los Angeles funky and cool. Chicago is hard-hitting and bombastic. New York is esoteric, boppish and heavy on improvisation. In this way, the record functions like a sort of core sample of the current jazz star-date we’re living in.

As jazz gains more popularity among younger audiences, McCraven is perfectly poised to help steer the ship. So many fusions of jazz and hip-hop have fallen short in terms of their honoring both genres. It’s a beautiful thing to see these energies combine in a way that’s so vital.   -NPR

It’s both surprising and refreshing that a band 25 years and 12 albums into their career would be bold enough to wilfully obscure their songwriting with such brazen production; credit to producer BJ Burton for helping to shape that environment. While this pairing successfully widened Low’s sonic remit on their last album, Ones And Sixes, their collective decision to really push beyond that is an utter joy to listen to, even with the darkness that runs through its core. Bands and producers working together don’t usually come up with such wild solutions.

True-life horror is rarely so completely entwined with pop music as it is on this album. When you listen to The Carpenters it is there, some gaping sadness just beneath, just like when you listen to Joe Meek you can feel some glint of the dreadful goings-on at 304 Holloway Road. Insecure Men has that, all over; something is inherently and brilliantly amiss. It is consoling, almost.

–Sons of Kemet Your Queen is a Reptile (Impulse!)

The record is a sonic meeting place where communities from across time can gather, plan, console. It’s the creek by the woods at midnight, the rave, the church, the political basement. The naming of the tracks offers more than just passive remembrance: it’s deliberate veneration. Each queen represents a different mode of resistance – this is music to move to, in dance and in action.

The record is quiet, even for Grouper’s standards, and it runs little over 22 minutes. Everything’s held back, and it creates mesmeric payoffs in microscopic instrumental introductions – like the recording artefacts on ‘Driving’.Harris is as elusive as her music, and gives few interviews. You follow her airy vocals through deserted landscapes with no guide aside from the track titles and occasional discernible lyrics. Mundanities, like roaming through a parking lot, driving and even breathing, are made eerie.

Lala Belu is at its best when you can sense its creator’s joy at returning to what he does best. Nowhere is this more palpable than on heart-in-mouth closing track ‘Yefikir Engurguro’, a solo coda that sounds like heavy tears of happiness falling on the keys of a piano.

It’s an album that imagines a world in which its author is the mainstream, rather than an influential outlier. It says something about its quality that, by the time it’s finished, that doesn’t seem a fanciful notion at all.

–Mitski Be the Cowboy (Dead Oceans)

–Yves Tumor Safe in the Hands of Love (Warp)

Stay tuned for our favorite reissues of 2018…