I Can Hear The Heart Beating As One 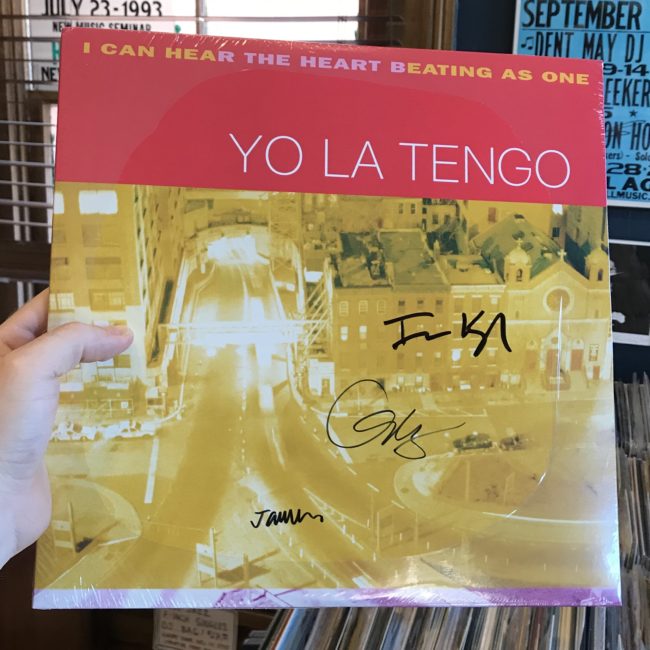 The October selection for our Record of the Month Club is the classic record, I Can Hear the Heart Beating As One, by Yo La Tengo. The band came through Oxford to play at The Lyric on September 18th. They were kind enough to autograph copies of the record for our ROTM Club members.

We also highly recommend folks to check out their latest album, There’s A Riot Going On, which dropped earlier this year on Matador Records.

I Can Hear the Heart Beating as One is the eighth studio album by the American indie rock band Yo La Tengo, released on April 22, 1997, by Matador Records. It was produced by Roger Moutenot and recorded at House of David in Nashville, Tennessee. The album expands the guitar-based pop of its predecessor Electr-O-Pura to encompass a variety of other music genres, including bossa nova, krautrock, and electronic music. Most of the songs on the album deal with melancholy emotions and range from short and fragile ballads to long and open-ended dissonance.

Upon release, Beating as One reached number 19 on the Billboard‘s Heatseekers Albums chart, becoming the first Yo La Tengo album to enter the charts. Three songs from the album, “Autumn Sweater”, “Sugarcube”, and the cover “Little Honda”, were released as singles. The album received considerable acclaim from music critics, who praised the band’s ability to successfully expand the boundaries of nearly any pop style. The album is widely regarded as the band’s best work and is frequently included on several publications’ best album lists. In 2010, Rolling Stone placed it at number 86 on its list of 100 Best Albums of the Nineties.

Pitchfork reassessed the album back in 2017 giving it a 9.7 rating. Read the review here.