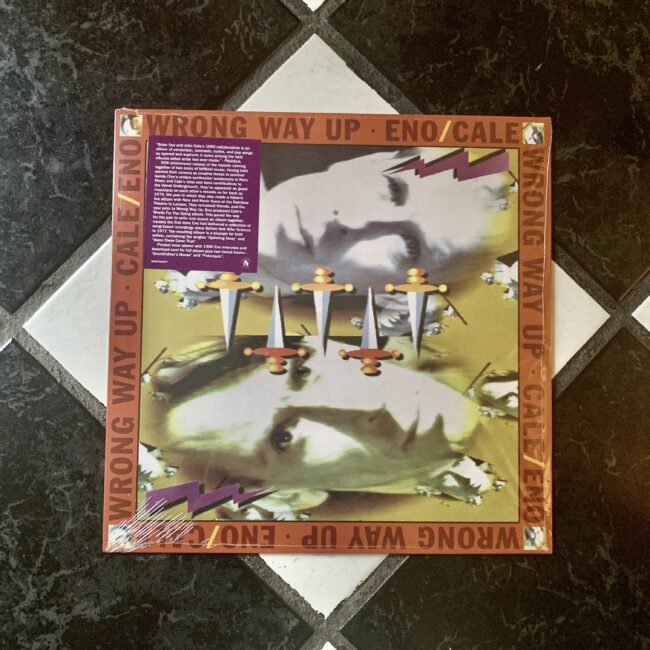 The last two ROTM Club picks (July and August) were both Soul records, so we decided to mix it up for September with a 1990’s classic from two pioneering artists–Brian Eno and John Cale. Wrong Way Up has been out-of-print on vinyl since it’s initial release and this new, 30th anniversary reissue sounds amazing (even if the original album artwork looks like it was made in 1990 using Microsoft Paint). This is the perfect record to ease into the fall season.

“Brian Eno and John Cale’s 1990 collaboration is an album of contention, cycles, and pop songs so layered and euphoric it ranks among the best albums either artist has ever made” –Pitchfork

Having both started their careers as creative forces in seminal bands–Eno’s unique synthesizer treatments in Roxy Music and Cale’s viola and bass contributions to the Velvet Underground–they’ve appeared as guest musicians on each other’s records as far back as 1974, the year in which they also made a legendary live album with Nico and Kevin Ayers in London. Eno & Cale remained friends, and the year prior to Wrong Way Up, Eno produced Cale’s Words for the Dying album. This paved the way for the pair to write and record an album together, notably the first time Eno had delivered a collection of song-based recordings since Before and After Science in 1977.

Club Members will get a copy of the 3oth anniversary reissue of Wrong Way Up, which contains an interview from 1990 with Brian Eno as well as a digital download for a couple of bonus tracks.