The ROTM picks for July and August are… 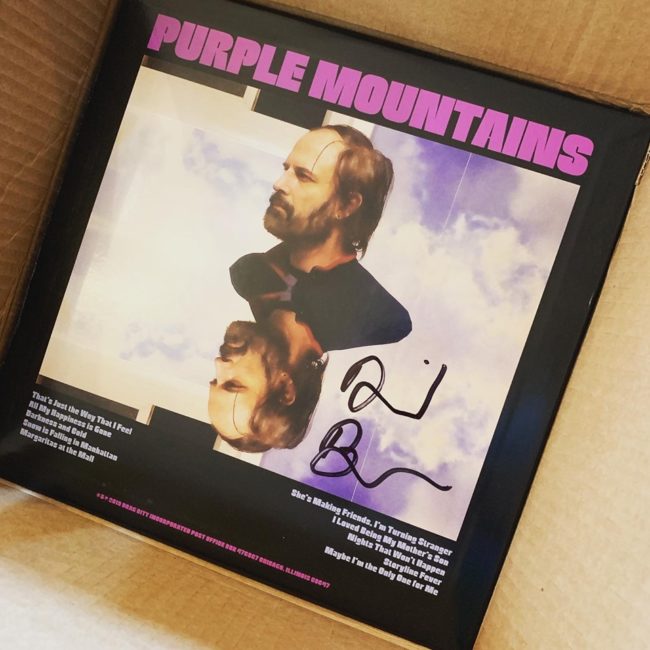 UPDATE: We are sold out of both the July and August records (Purple Mountains LP and Bill Callahan’s Shepherd in a Sheepskin Vest). Due to the limited nature of these records being signed by the artists we are not able to reorder any copies. Any new subscriptions will start with the September record. Thanks!

We rarely announce two months worth of Record of the Month Club news at the same time, but this is a special occasion. We’ve got two amazing records from the excellent Drag City Records coming your way.

First up for July, we’ve got the debut album from David Berman’s new project, Purple Mountains. Berman’s first band, Silver Jews, is one of our favorite bands of all time and we really thought Berman had hung it up for good 10 years ago after the Silver Jews’ final album, Lookout Mountain Lookout Sea, came out on Drag City. BUT HE’S BACK WITH A WHOLE NEW BATCH OF MATERIAL! We hit up the folks at Drag City and they were able to get David Berman to sign all of our copies for our ROTM Club. Next up for August, ROTM Club members will be getting a copy of Shepherd in a Sheepskin Vest by Bill Callahan. The record came out back in June but Bill is playing in Oxford at Proud Larry’s on July 18th, so we asked him to swing by the shop and sign copies of his new record, and he said YES! The new album is Bill’s first new work in 5 years and it’s a double LP full of new songs…some of the best of his long career. Update: Rather than autograph the records, Bill doodled a little drawing on each copy making every copy different and unique! You read that correctly! ROTM Club members will be getting two signed records from two legendary songwriters–Bill Callahan and David Berman. Talk about a 1-2 punch.