The Frogs “It’s Only Right and Natural” 30th Anniversary Reissue 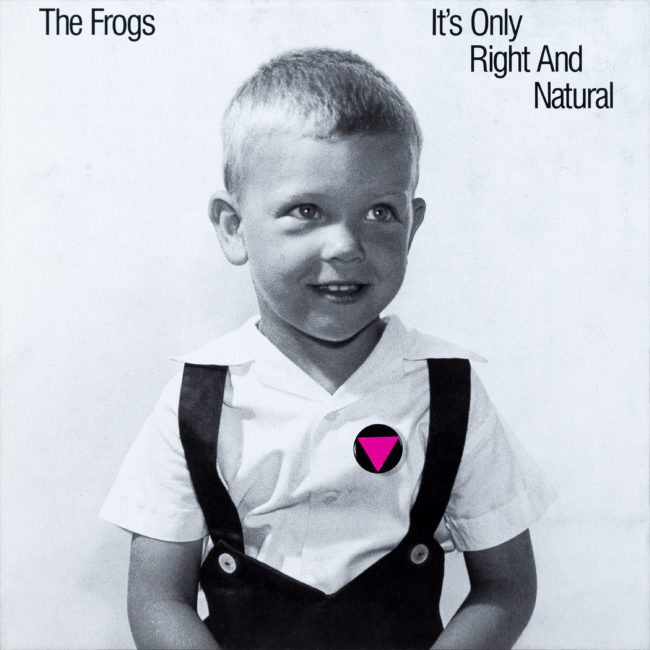 We’re pleased to announce the release of the 30th Anniversary vinyl reissue of The Frogs cult classic, It’s Only Right and Natural. The record was originally released in 1989 on Homestead Records.

The vinyl reissue features remixed and remastered audio (the original album was accidentally pressed in mono when released in 1989) and comes housed in a gatefold sleeve with newly added artwork (same classic cover!) plus track-by-track liner notes and intro by Jimmy Flemion. The record hits finer record stores everywhere on August 16th. Check out a few tracks on Bandcamp here.

PREORDER YOUR COPY HERE. ALL PREORDERS WILL GET A FREE FROGS BUTTON AND WILL BE ENTERED TO WIN A TEST PRESSING OF THE ALBUM. The album was one of Kurt Cobain’s favorites. It was #14 on Kurt’s infamous list of Top 50 albums.

“The insane secret of the record is it’s perfect”-AllMusic (read the full review here.)

“I would walk into Kim’s Video on Bleecker Street or Other Music and ask for things, and they would go, “Oh, have you heard of the Frogs?” The Frogs’ album It’s Only Right and Natural totally blew me away. It was this weird gay concept record, but they weren’t gay. They were these brothers from Milwaukee who used to dress up in fairy costumes. One of the brothers would play a huge kettle drum and almost do these quasi-surrealist minstrels. The music was so good because it wasn’t really just conceptual, it was pop; once you got over the crudeness of the lyrics, the songs themselves were beautiful pop music.”  – Harmony Korine

Read the press release below:

Long before Dennis and Jimmy Flemion found themselves adopted by avatars as far flung as Jim O’Rourke and Sebastian Bach, before their Cause célèbre lead to a near-boycott (of a record label no one was buying records from anyway) and certainly before Beck Hansen had the bright idea to sample, “that was a good drum break” from “I Don’t Care If U Disrespect Me (Just So You Love Me)”, there were the songs.  The goddamn Made Up Songs.  On cassette tapes. Legend has it they fell into the hands of my friends and I due to the patronage of one or two midwestern underground rock luminaries but I prefer to believe it was an otherworldly intervention that first brought “Out Of The Mist” to my basement boom box (albeit on the flilpside of a live Die Kreuzen recording).  To call the impact seismic would be an understatement ; I’ve yet to recover!

Is it fair to say that arm-twisting the Flemions into a thematically consistent ‘It’s Only Right & Natural’ did their prior and future works a disservice?  Probably.  Simply because it’s one of the most inspired albums of all-time, DIY or not — doesn’t mean they peaked (if you’re inclined to investigate further,  you’ll figure it out. And if you’re not inclined to investigate further, I’m pretty sure you and I have absolutely nothing to say to each other).   Is it fair to say Homestead’s ill-advised attempt to claim FROGS was an acronym for “FOUNDING REVOLUTIONARIES OF GAY SUPREMACY” was a profoundly stupid gesture, guaranteed to lead to no good whatsoever?  Not exactly.  I don’t remember getting any advice.

All of that aside, IOR&N more than holds up as a monumental WHAT THE FUCK moment in pop history, even if it only skims the surface of the brothers’ respective skill sets and vast influences.  Many of us have the album’s lyrics, Jimmy and Dennis’ vocal delivery committed to memory, though bear in mind, those in possession of the Homestead CD version only heard some bizzaro mono mix (THIS WAS SOMEONE ELSE’S FAULT, BLAME ME FOR EVERYTHING BUT THIS) so there’s every chance this might be the first time you’re hearing this glorious album the way it was truly intended.   And if you are having that wondrous experience — being introduced to such a rich cast of characters (Hot Cock Annie, Baby Greaser George Richard Dick Richards), it would be an overstatement to say I envy you.  But only a very slight overstatement (for instance, it might depend on what you look like and how much money you have).

LOVE YOU DENNIS, THANKS FOR EVERYTHING.
FROGS 4 EVER “There are bands, and then there are groups. And The Frogs, from Milwaukee, Wisconsin, just a short shot north of America’s Midwest, are a fine group. These days being in a band means as much about perception as calculation, but there is little manipulation in this group because you see, The Frogs just are; point is they exist. They shouldn’t really, because they are either too good for rock and roll, or too politically incorrect to matter. But they are one of the greatest rock groups to come out of the 20th century precisely because they are too good for rock and roll, and too smart to care about caring. Fine tunesmiths, they craft memorable hooks out quite readily before stomping on them because they dare to exist. Nothing is sacred, but the reverence is there for the unspeakable uncomfortability that is at the heart of merging electricity and feeling and commerce. They have neither won nor lost, they persist. Deal with them before they put you in their sights and deal with you by ignoring what you care about. Their agenda is clear; to love, but never in the way you love. Their love is strong, willful, and brutish. make a wish, and they can make it come true.” – Billy Corgan (The Smashing Pumpkins)

One of the more remarkable acts to emerge from the indie rock scene of the 1980s and ’90s, the Frogs were a group with something to attract and offend nearly everyone — they were canny songwriters who could write and perform melodically satisfying tunes in a variety of styles, but they enjoyed marrying them to lyrics that were usually absurd and frequently offensive, drawing eccentric humor from issues of race, sex, contemporary culture, and the music business. While the larger mainstream audience never embraced them, for a band so eager to polarize they managed to be exposed to far more listeners than one might have expected, largely because their fan following included a handful of important alt-rock tastemakers, including Kurt Cobain, Eddie Vedder, and Billy Corgan.

The Frogs were formed in 1980 by two brothers from Milwaukee, Wisconsin, guitarist Jimmy Flemion and percussionist Dennis Flemion (both doubled on keyboards), and while a number of other musicians would work with the group over the decades, the Flemions would remain the creative core of the Frogs, often performing and recording without further accompaniment. The Flemions started playing coffeehouse gigs in their hometown as a duo, and expanded to a three-piece with the addition of bassist Jay Tiller, who also worked with the group Couch Flambeau. The Frogs’ enthusiastic embrace of the absurd and the outré made itself know early on, when Jimmy fashioned a large pair of wings (resembling those of a bat or an angel, depending on who you ask) he took to wearing on-stage at their frequent shows in the Midwest, along with wigs and faux-glam rock costumes that were part of the band’s low-budget stage spectacle. In 1988, the Frogs released their self-titled debut album, a set of tunes that walked a tightrope between power pop and glam rock; the album came and went with little notice, but a few months later, a set of lo-fi living room recordings by the Flemion Brothers made their way to Gerard Cosloy, then running the noted indie label Homestead Records. Cosloy was quite taken with what the Frogs called their “made-up songs,” partially improvised as the tape rolled, and he assembled 14 of their dozens of “made-up” tunes into an album. 1989’s It’s Only Right and Natural consisted of eccentric folk-rock numbers dealing with homosexuality, suggesting a fusion of David Bowie’s Hunky Dory and T. Rex, and embracing a gleeful tastelessness on songs like “I Don’t Care If U Disrespect Me (Just So You Love Me),” “Dykes Are We,” and “Been a Month Since I Had a Man.” Facetiously billing the Frogs as “gay supremacists,” Homestead turned It’s Only Right and Natural into an underground success. In 1995, Matador Records released a Christmas-themed Frogs single, “Here Comes Santa’s Pussy,” and another album of “made-up songs,” My Daughter the Broad, followed in 1996.

While the Frogs’ recording career seemed to have hit a plateau, as a live act they were faring quite well; Kurt Cobain, who was a fan of It’s Only Right and Natural, had taken to talking the band up in interviews, and their fame spread among savvy fans of underground rock. Billy Corgan was fond enough of the Frogs’ music that he invited them to open for Smashing Pumpkins on a 1993 tour, and in early 1994, Eddie Vedder followed suit, booking the Frogs to open for a string of Pearl Jam dates. Beck sampled a line from It’s Only Right and Natural for the song “Where It’s At” on his breakthrough album Odelay in 1993, and in the summer of 1994, the Frogs played the second stage of that year’s Lollapalooza tour, with Corgan regularly joining them to play the jaded rock star’s anthem “I Only Play 4 Money.” Vedder would also sing the same tune with the Frogs on-stage, and in 1995, they received a unique endorsement from Pearl Jam when the Frogs’ cover of “Rear View Mirror” became the B-side of Pearl Jam’s “Immortality.” In the summer of 1996, Smashing Pumpkins lost their touring keyboardist Jonathan Melvoin to a drug overdose, and Dennis Flemion was recruited to take his place for an arena tour that extended into early 1997, making him a genuine rock star for a few months.

The Frogs’ relationship with Smashing Pumpkins also helped to kickstart their recording career. Corgan produced an EP for the group, Starjob, a song cycle about one alt-rock star’s rise and inglorious fall (with Corgan credited as “Johnny Goat”), and when Corgan’s bandmates James Iha and D’Arcy Wretzky helped launch a Polygram-distributed label called Scratchie Records, the Frogs were signed and Starjob became their first release with major-label distribution. However, the disc sold little better than the Frogs’ indie label releases, and their next album, another collection of their “made-up” home recordings called Bananimals, was released in 1999 by the independent Four Alarm Records.

The Frogs grew increasingly cynical about the music business, and in 2005 they cut back sharply on their live appearances and stopped releasing new music, though their archives of “made-up” songs circulated widely among fans. The Frogs seemed poised for a revival when the group released two albums digitally in July 2012, Count Yer Blessingsz and Squirrel Bunny Jupiter Deluxe, but only a few days after the albums were released digitally, Dennis Flemion went for a swim while joining family and friends for an afternoon of boating on Wind Lake in Racine, Wisconsin. He went missing, and was discovered dead several days later; he was 57. In a memorial essay posted on the Matador website, Gerard Cosloy praised the Frogs, writing “With the possible exception of Bob Pollard, it’s hard to think of anyone nearly as prolific as the Flemions, and you could certainly make a case for their catalog being every bit as impressive.”